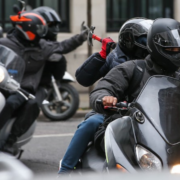 Many readers of Corps Relay will no doubt share our own concerns regarding the seemingly worsening trend of serious crimes being committed by young riders of Mopeds, who are often accompanied by pillion passengers. In the past week alone, there have been several serious Moped attacks in the London area, including an armed robbery against a watch shop in Fleet Street, and a Moped gang mugging incident a few days ago in the Liverpool Street area.

These questions have perplexed the Police service too, and in recent weeks the Met Police Commissioner, Cressida Dick, outlined a number of steps that the Met will be taking. Commissioner Dick has said that the theft of mopeds and their use in snatching mobile phones or spraying acid on victims has helped to fuel what she described as “a trend, not a spike” in violent crime.

Significantly, some suspects have practised their crime, of riding up to victims and snatching their phones. iPhones are a popular target and, if stolen while in use and unlocked, can be wiped, reprogrammed and sold on the black market for £200.

Such attacks have mostly been carried out by two people on one bike, with the pillion passenger snatching the phone.

The latest steps by the Met to address the trends include the following:

The Met is also stating that in the past three months their new tactics have reduced moped thefts by 25% and Moped-enabled crime by 24%.

For our readers the trend may seem to be increasing, rather than decreasing, so what can we all be doing to deter, and mitigate the effects of such attacks?

Steps we can all take include the following: