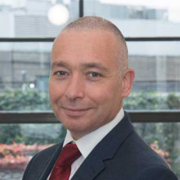 Rob Hill has worked for Corps Security since 2011 in a range of business development and commercial roles. He’s been Managing Director of Corps Monitoring since September 2019.

There are plenty of misconceptions when it comes to monitoring. What do you actually do?

We monitor a wide range of devices  – typically CCTV intruder or fire alarms, personal attack alarms, or even the detection of water or gas leaks, but really anything with a sensor that can transmit a signal over IP. We can patrol a site remotely using cameras and even confirm questions like whether the site’s broadband is working correctly. We also support organisations to grant remote access to buildings or sites.

The signals will come over the internet to our Alarm Receiving Centre in Glasgow and our specially-trained officers will receive an associated alarm and respond in accordance with a strict protocol which is specific to the site and the type of event. There’s a perception that it’s just people staring at walls of TV screens and live CCTV images. That’s how it used to be. Now it’s more about sensors, video analytics and artificial intelligence. Most camera systems will detect movement, and then communicate the signal to us, however some are now so sophisticated that they can tell the difference between a fox triggering an alarm (which we don’t have to worry about) and a person walking across a site, which might be cause for concern.

So monitoring is all about protecting property and assets?

Yes and no. Much of the work is about physical assets but we’re keeping people safe too – just like security officers in buildings do. We monitor several high net worth individuals, including TV and sports personalities who rely on the monitoring centre to not only to protect their homes but also keep their family safe. We also support people working alone who use personal attack alarms through our Corps Guard app. Through that we’ve helped people escape from very dangerous situations including an attempted kidnap and an attempted robbery.

You and your team must have experienced some memorable moments?

Yes, we’ve had almost everything you can imagine, both good and bad. On the more light-hearted side,  we’ve witnessed a drunk man falling over the wall into a site who then couldn’t get out. We had to inform the key-holder who went to site to let him out. Then there were some naked hippy types in Cornwall who were dancing through protected areas blowing kisses to the camera operators as they were issued audio warnings to leave the area. There was also an incident where a man armed with a rifle was seen on a customer’s site. We naturally reported it to the Police, who attended site with armed colleagues. He turned out to be a pest control officer commissioned by the customer to rid the site of unwanted pests. The customer had simply forgotten to tell us!

But our people also witness distressing incidences and we provide counselling support when this happens. One of our clients has a large cash and carry chain and we saw the staff being held at gun point with several armed masked men. We informed the Police and guided them into the site silently to ensure the safe release of the staff. Armed holdups are the most common incidence we come across and we work very closely with the Police across the country. But for us it’s about detecting potential offenders before they have the opportunity to commit crime so we can keep people and property safe.

How have you and the team adapted during Covid?

Customers’ working patterns have significantly changed. Many sites that were monitored only overnight are now unoccupied during the day so they need 24-hour monitoring. This has meant an increase in our workload whilst also having to ensure our team’s safety through social distancing and deep cleans between shifts.

What would you say to anyone looking to join the monitoring industry?

Join us! It’s a fast-paced industry that is always challenging but very rewarding. The single most valuable piece of advice would be to visit our Alarm Receiving Centre so we can show you what’s possible. You’d be amazed!

So, what’s the future of monitoring? Is there any new technology coming down the line?

All the time! There are constant improvements in cameras and technology. This is a sector which never stands still. Thermal imaging cameras, which can detect people with an unusually high temperature, are an example of technology being introduced into many buildings in preparation for the return to work post-lockdown. Over the past few years, we’ve also started to see automated access control around whether people are wearing the correct PPE, such as hard hats in construction sites, with signals notifying us if someone is flouting the rules. Analytics are also getting better all the time. We used to get lots of false signals for foxes, or tree branches in the wind. That’s much less of an issue today. Now our systems have learned to ignore people walking away from the camera but to focus on those walking towards a site or loitering. They’re becoming so intelligent and that’s where the future is. 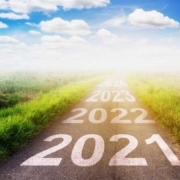 January is always a chance to look back on the previous 12 months and look forward to the coming year and 2020 certainly gave us plenty to reflect on.

While the pandemic has undeniably been devastating too many lives and livelihoods, it’s also seen an enormous shift in the security profession. This year will see many of those changes permanently embedded into the way we do things.

Firstly – and most importantly – our people have been recognised as being essential workers, something that many businesses wouldn’t have thought about before. Security officers served on the front line of the pandemic and were a visible presence in empty buildings and those operating a skeleton staff. But less visible, but not less important, were those working in our Alarm Receiving Centre in Glasgow monitoring thousands of alarms and cameras across the country keeping people and premises safe and secure. Businesses now appreciate their security teams a great deal more and that change will be permanent.

While our monitoring teams support our customers, it’s important that we support them. Our teams’ wellbeing has always been our main priority but the pandemic has really brought this to the forefront. As a result,  our colleague portal has been improved up and now has a colleague wellbeing section that offers support on mental wellbeing, exercise and nutrition.

Like everyone else, our customers have needed to constantly adjust their security provision as the pandemic changed working practices. As part of being adaptable and flexible, we’ve seen officers change their shift patterns, often becoming more mobile. We’ve also been increasingly using our monitoring capability, as many customers complemented physical security officers with security technology. We believe this increased use of security technology will also be a permanent change, accelerating a long-term trend.

The pandemic has taught us a great deal. It’s sparked a new level of compassion and made us more united, collaborative, resilient and innovative. It has also elevated the importance of our frontline security workers – both officers and those in our monitoring centre. We have always been an advocate of the Living Wage and we will only beat that drum louder now. Security is not just about security anymore. It’s about keeping people and places safe and secure

Corps Monitoring has achieved carbon neutral status after a drive to reduce carbon across the business while offsetting where carbon creation was unavoidable.

Carbon Neutral ­– also known as Net Zero Carbon – is used to describe the state of a company, service, product or event where carbon emissions have been balanced out by funding an equivalent amount of carbon savings elsewhere.  Over the past 12 months, Corps Monitoring has reduced its carbon in a number of different ways such as reducing its diesel fleet and air travel and cutting the use of paper. At the same time, Corps has funded green projects to offset its 477 tons of carbon. This includes a wind-based power generation project in Maharashtra, India which is helping to reduce reliance on coal while also creating more jobs. The project was suggested by Carbon Footprint, which awarded Corps Monitoring with its carbon neutral certification.

Corps Monitoring is also rolling out more electric vehicles and installing electric charging points at its Glasgow and London locations.

“Our move to being carbon neutral is to ensure we met the Streamlined Energy & Carbon Reporting scheme that came in last year. “But we wanted to go one step further and demonstrate that we’re carbon neutral,” said Mike Bullock, CEO, Corps Security. “As an organisation with a 160-year history, we take a very long-term view and we want to make sure the world is around for future generations to appreciate.”