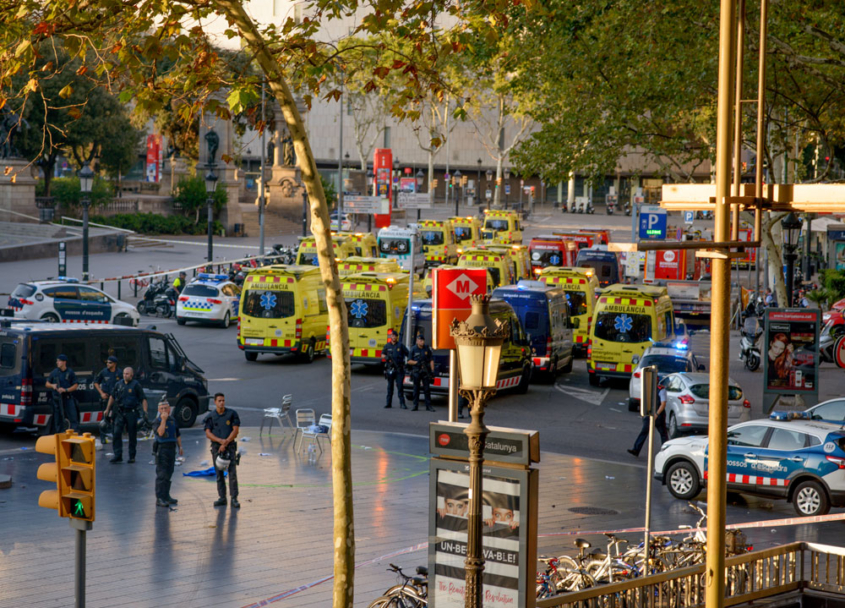 Hello and Welcome to this latest edition of Corps Relay…

…the newsletter designed to help you protect your people and property whilst giving important updates from the world of security.

In this issue we start with the Barcelona Attacks, giving the information we know, as well as some top tips on how to help prevent such attacks.

We then discuss the recent rise in acid attacks before detailing how the “Three Musketeers” have been found guilty of planning a terrorist attack on British soil.

Finally, we give an update on further developments around armed policing in the UK.

What we know so far:

Islamic State (Daesh) claimed responsibility for the attack, however the terror group frequently declares that it is behind terrorist incidents, although their claims should always be treated with caution.

The driver was arrested some two and a half hours after the attack, and a second suspect was also subsequently arrested. Police shot dead a third man who drove at officers at a checkpoint. It is unclear whether he was connected to the Las Ramblas attack. Las Ramblas, is a busy tree-lined promenade in the centre of the city, and is very popular with tourists.

One of the arrested men was named by police as Driss Oukabir, a Moroccan national who resides in Spain. He is suspected of renting the van.

What can we do to help prevent or mitigate such attacks?

Maintaining vigilance is key! Of course, vigilance is not the exclusive domain of security personnel, and readers and customers are reminded to encourage all staff and contractors at their premises to be alert, and vigilant to any suspicious behaviour, or activity.

Please ask yourselves the following questions relating to the security of your own premises:

It is vital that Access Control and anti-tailgating measures are as robust as possible, and that unauthorised persons are not allowed to gain access to your premises!

That it is vital that everyone looks out for hostile reconnaissance, and that any suspicious activity is reported in real-time!

Earlier today we learned that Spanish police have killed five suspected terrorists in the town of Cambrils in order to prevent another vehicle attack, following the earlier attack yesterday in Barcelona.

Spanish police report that the men, were wearing explosive belts, and were linked to the first attack. Significantly, the Spanish authorities are now also linking the attacks in Barcelona and Cambrils with an explosion at a house on Wednesday evening in the town of Alcanar that left one person dead. It is being reported that residents at the Alcanar house had been “preparing an explosive device.

In Cambrils itself, seven people, including a police officer, were wounded when a car was driven into them early on Friday. One person is in a critical condition.

It is also being reported that the attackers’ vehicle overturned, and when the men got out they were quickly neutralised by police.

Here at Corps Relay, we consider that given that there have been two attacks so close together involving a sizeable number of people, indicates that there is a well organised Jihadist group (or groups) operating in Catalonia at this time. It is not yet known whether this group is taking its orders direct from Daesh (Islamic State leadership), but as stated earlier in this issue, Daesh will be quick to claim responsibility for these attacks to bolster their ‘reputation’ following continuing losses on the main battlefields of Syria, and Iraq.

Acid Attacks on the Increase

There has been a worrying spate of acid attacks in London in recent weeks. Whether they are gang related, theft related or just random attacks, it has become clear to see that acid (of different types, including household cleaning fluids) has become a popular weapon for criminals.

Corps Security has distributed guidance information that was published by SP Services on how to treat a victim of an acid attack. A summary is below, but if you would like the full content then please contact the Corps Relay team.

Cover with cling film or a sterile non-fluffy dressing.

For information regarding this or for PPE for acid attacks, SP Services can be contacted on the below number:

Three men, nicknamed “The Three Musketeers”, and an aide have been found guilty of planning a terrorist attack involving a pipe bomb and a meat cleaver targeting the military or the police.

Naweed Ali, Mohibur Rahman, Khobaib Hussain – The ‘Three Musketeers’ – and Tahir Aziz were found guilty at the end of a 20 week trial. They were originally arrested on 26th August 2016 after a sting operation uncovered a bag of weapons including a pipe bomb, an air pistol and a meat cleaver with the word kafir (unbeliever) scratched onto it. Counter-terrorism officials believe it is one of the most significant terror plots they’ve thwarted in the previous year.

The ‘Three Musketeers’ have been jailed for a minimum of 20 years apiece, whereas Aziz was ordered to serve a minimum of 15. Three of the four have previous terrorism convictions.

The Met Police have announced that Head-mounted cameras are due to be issues to police officers who carry an “overt” firearm in an effort to provide “greater transparency” in police shootings.

The rollout, part of one of the largest rollouts of body worn cameras by police in the world, will see cameras fitted to baseball caps and ballistic helmets of officers patrolling the streets of London. Body worn cameras are not new to the Met Police. They were trialled after Mark Duggan was shot be armed officers in August 2011, but were branded as “unfit-for-purpose” in 2015 due to the positioning of them on the officer. Once a firearm was raised by the officer the image was blocked and thus the cameras were found to be not all that useful.Met Police Commander Matt Twist, has said that armed officers “very much welcome” the cameras. He is also recorded as saying “The cameras also offer greater transparency for those in front of the camera as well as those behind it”.

Body-mounted cameras have already been issued to officers in 30 London Boroughs, as well as officers from transport units, territorial support group and the dog unit.

Future issues of Corps Relay will continue to provide updates on policing and security here in the UK.  In the meantime the international terror threat level in the UK remains at severe, meaning an attack is “highly likely”.

Everyone should always remain alert to the danger of terrorism and report any suspicious activity to the police on 999 or the anti-terrorist hotline on 0800 789 321.

For further information, or for back copies of Corps Relay, feel free to contact our team direct on 020 7566 0516 or via

Today we thank all former, current and future Reserves of the Armed Forces for their dedication and service. Comprising one sixth of our current armed forces service personnel, we celebrate their integral role in the security of our nation. #ArmedForces #ReservesDay2022 #Veterans