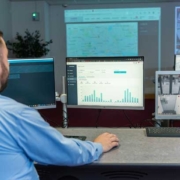 CCTV Live Surveillance has played a starring role in the news of late.

As investigations into alleged Downing Street parties continue, news reports suggested that The Metropolitan Police was set to receive full access to all the evidence it needs, including CCTV footage.

The British Security Industry Association estimates that there are as many as 6 million CCTV live surveillance cameras operating in the UK. That works out at approximately one camera for every 11 people. There should be no doubt about the pivotal role that security cameras play in preventing crime and terrorism in public and in private spaces.

CCTV live surveillance has been a hidden hero in keeping businesses, employees, and assets safe over the past two-years. However, as we enter this new, and hopefully last chapter of the virus, businesses mustn’t become complacent with their site security. The presence of CCTV live surveillance cameras and lighting alone is often enough to deter any would-be intruders or trespassers.

Because of the effectiveness of CCTV, we expect to see a shift towards more tech-based security operations. There will still be a physical presence, but organisations will want smaller, more highly skilled, and trained teams, who will be better paid, to complement their technology.

CCTV live surveillance is most effective when it is viewed as part of the wider enterprise security ecosystem. By combining CCTV with other systems such as alarms for HVAC, lighting, access control, fire detection, water detection and intruder detection through an integrated software platform, organisations can build a complete picture of their assets and design a multi-layered defence against any security threats.

CCTV cameras in the outer perimeter of a site function in two ways: firstly, as a detection and deterrence tool; and secondly, for evidence if criminals are determined to break through. Another layer of cameras within the building can then be linked to the intruder alarm system. These capture the intruder’s movement and trigger the alarm system.

The Corps Monitoring Centre (CMC) in Glasgow, an alarm receiving centre (ARC) that holds the very highest gold ARC II accreditation, allows our operators to access crucial data, receive instant alarm notifications and share this information with customers and predetermined users anytime and anywhere. While on the phone to the police, live CCTV footage enables us to provide vital identifying information such as the intruder’s appearance, their clothing, and which vehicle they are driving. The intruder alarm also lets us determine their exact location.

Risk, threat, and disruption are part of our sector’s everyday lexicon. But the security providers that meet new challenges, keep people safe and add value for their clients will be the ones that come out the pandemic stronger.